During the week commencing 4 December 2017, the share price of Steinhoff International Holdings NV came under intense pressure falling from a closing price on Friday 1 December of R55.60 to its closing price today, Friday 8th December of R6.00, a fall of just over 89%.

Why has the Steinhoff share price fallen by so much?

On the 4 December 2017, Steinhoff issued a statement regarding their 2017 Results and Audit Process. This announcement conveyed a message of uncertainty as it stated that 2017 consolidated financial statements were to be released on the 6 December in an unaudited form. It went further to state that the Board and Auditors had not been able to finalise their review of certain matters initially raised by the criminal and tax investigation in Germany.

Late on Tuesday, 5 December, Steinhoff announced an investigation into accounting irregularities and the resignation of CEO, Marcus Jooste, with immediate effect. In Wednesday morning’s statement, the board announced that new information had surfaced with regards to accounting irregularities requiring further investigation and that they had approached PWC to perform an independent investigation. The statement went on to say that audited 2017 financial statements would be delayed and there would be a review of prior years’ financial statements.

In the tables below we have attempted to quantify the impact that exposure to Steinhoff has had on our clients portfolios.

The first table shows the impact to the Southwood Balanced Fund. Due to exposures to Steinhoff in the Foord Equity Fund and Coronation Top 20 Fund there has been a 1.9% loss in value.

The second table lists a variety of individual funds that our clients are exposed to and the impact that Steinhoff has had in each. 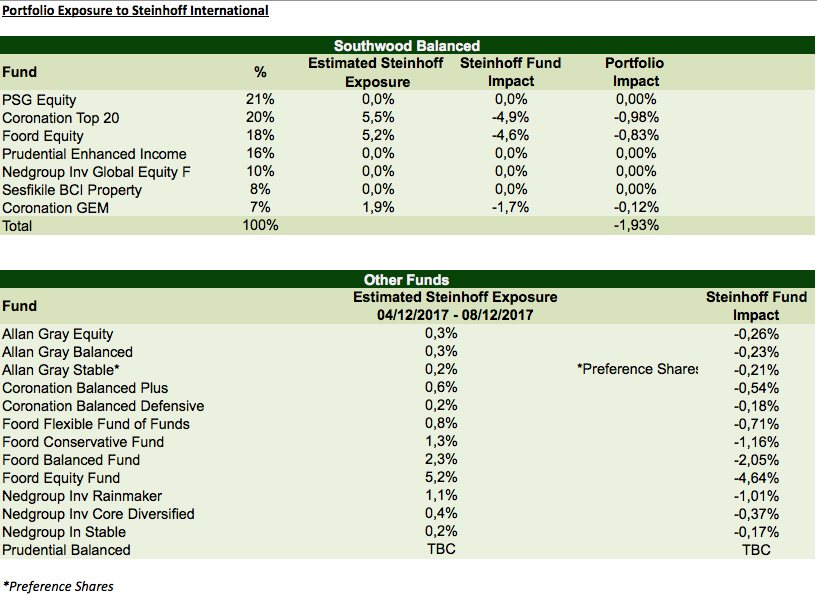 Conclusion This is understandably disturbing for all investors but it is now that we need to reiterate the patience required when following a long-term investment objective which requires exposure to risky assets. Following events of the past week, we would like to draw attention to our guiding principle in allocating clients capital – PRUDENT DIVERSIFICATION!