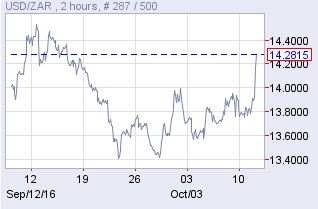 National Prosecuting Authority (NPA) head Shaun Abrahams announced that Finance Minister Pravin Gordhan has been summoned to appear in court on charges of fraud. The charges are in connection with his tenure as Head of SARS (South Africa Revenue Service), and refer to the so-called rogue spy unit. Gordhan is expected to appear in court on 2 November, alongside former commissioner Oupa Magashula and former deputy Ivan Pillay.

What is the impact on the rand?

The rand lost over 3% on the announcement and is currently trading over 14.20/$.

What can we expect going forward?

Volatility will be the order of the day. Once the dust settles, markets will digest the news before a new trading range emerges. The big danger is the removal of Finance Minister Gordhan from office. Keep an eye for any signs that the President reshuffles cabinet or ‘redeploys’ Minister Gordhan. The removal of Gordhan will almost certainly send the rand into another round of free-fall.