NO NEED TO FEAR NATIONALISATION

”In order to “collapse” the most diversified and influential economy on the African continent, one would obviously have to resort to some form of anarchy.”

When a fairly senior office-bearer of the ruling political party in South Africa advocates the “collapse” of the economy via a policy of nationalisation, it is difficult not to become somewhat alarmed.

Viewed objectively, however, there is nothing to fear. The official in question happens to be Mwandile Masina, the mayor of Ekurhuleni – the metro that houses OR Tambo International Airport and a vibrant commercial and industrial hub generally referred to as a potential “Aerotropolis”.

In order to “collapse” the most diversified and influential economy on the African continent, one would obviously have to resort to some form of anarchy. Fortunately, Mr Masina does not have the means at his disposal to conduct such an exercise – whether by Stalinist-style policies or by orchestrated violence.

It is also fortunate that the ANC did not hesitate to repudiate Mr Masina. In a statement shortly after the tweet that caused the furore, ANC national spokesperson Pule Mabe said Mr Masina’s post fell outside the confines of the party’s policy position.

There can be no doubt that the overwhelming majority of senior officials within the ANC are acutely aware of the disaster that occurred in Zimbabwe with an experiment similar to the one that the Mayor of Ekurhuleni (and his friend, Julius Malema) are proposing.

Literally millions of Zimbabweans have fled the country as a result of the disastrous land grabs that accompanied the policy of nationalisation, implemented by the late Robert Mugabe. Approximately half of those that have remained in a country that was once a net exporter of food are now reliant on international food aid.

Venezuela is a more recent example of the short-cut to abject poverty that inevitably accompanies a policy of nationalisation (unless the might of the world’s largest army is there to enforce communist restrictions on freedom – as in China).

According to the 2019 Human Freedom Index, published jointly by the Cato Institute, the Fraser Institute, and the Friedrich Naumann Foundation for Freedom, Venezuela is ranked no 161 out of 162 countries for which sufficient data is available.

In 1970, Venezuela had the 10th highest level of economic freedom in the world and a functioning liberal democracy that protected human freedom in general. Then a greedy elite entrenched power with the assistance of the armed forces, enjoying a lavish lifestyle through corruption, all in the name of radical socialism and its inherent appeal to relatively poor communities.

Now Venezuelans are struggling to regain their freedom, but millions have fled the country as a result of gross human rights violations and economic collapse, with hunger having become increasingly prevalent. The economy is in tatters and the petrol pumps in this oil-rich country have just run dry – a text-book case of economic implosion as a result of nationalization. 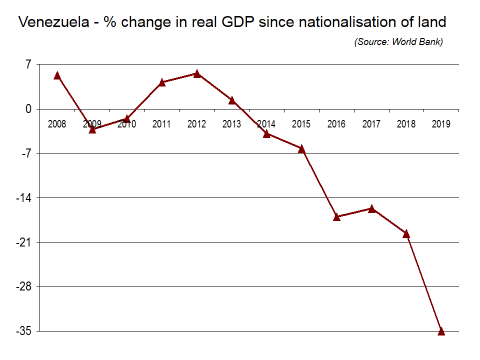 Hardly anyone will invest in productive assets in a country that does not guarantee private property rights. Such investment is called capital formation and its correlation with future economic growth, employment creation and taxation revenues is extremely high and predictable.

The very last objective in the minds of South Africa’s executive political leadership under Pres. Ramaphosa is to discourage investment. In fact, the first two annual Presidential Investment Summits have generated firm pledges for new investment totaling R663-billion – no mean feat that has already secured 57% of the five-year target of R1.2-trillion.

South Africans should be reminded of the fact that, ever since the 1994 elections, the nationalisation of companies or industries has never been ANC policy and will never be.

It is also worth remembering that South Africa is a young and vibrant democracy that caters for a multitude of different cultures, beliefs and political affiliations. The country enjoys an exceptional high global ranking for freedom of speech, freedom of the press, economic freedom and freedom of political and religious affiliation.

As an inference, many different opinions are communicated every day, some with substance, some void of rationality, some just plain ignorant. The price that one pays for living in a country with so much freedom is to be vigilant of the difference between substance and noise. Mr Masina’s remarks falls in the latter category and are best ignored, like the vitriol that emanates regularly from other radical politicians.

Should Mr Masina officially join his self-proclaimed friends in the EFF, where his sentiment obviously lies, he will be relegated to a party that could only muster marginally more than 10% of the vote in the previous election.

The ruling party would be well aware of the very high level of goodwill that exists amongst the overwhelming majority of South Africans of all cultures, creeds and colour. Importantly, this includes a healthy respect for employers who take on enormous risks and have to be multi-skilled for their businesses to survive in a highly competitive domestic and global economic environment.

It is also encouraging that National Treasury has repeatedly demonstrated its commitment to Pres. Ramaphosa’s promises of market reforms

The message, therefore, is clear: there is no need for undue concern over the senseless tweet of a self-proclaimed opponent of the vision that Pres. Ramaphosa holds for South Africa’s future. Believers in welfare-creating and market-friendly economic policies hold sway over virtually all economic processes and political power. 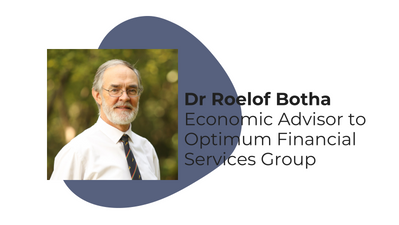 Note: The opinions expressed in the article are those of the author