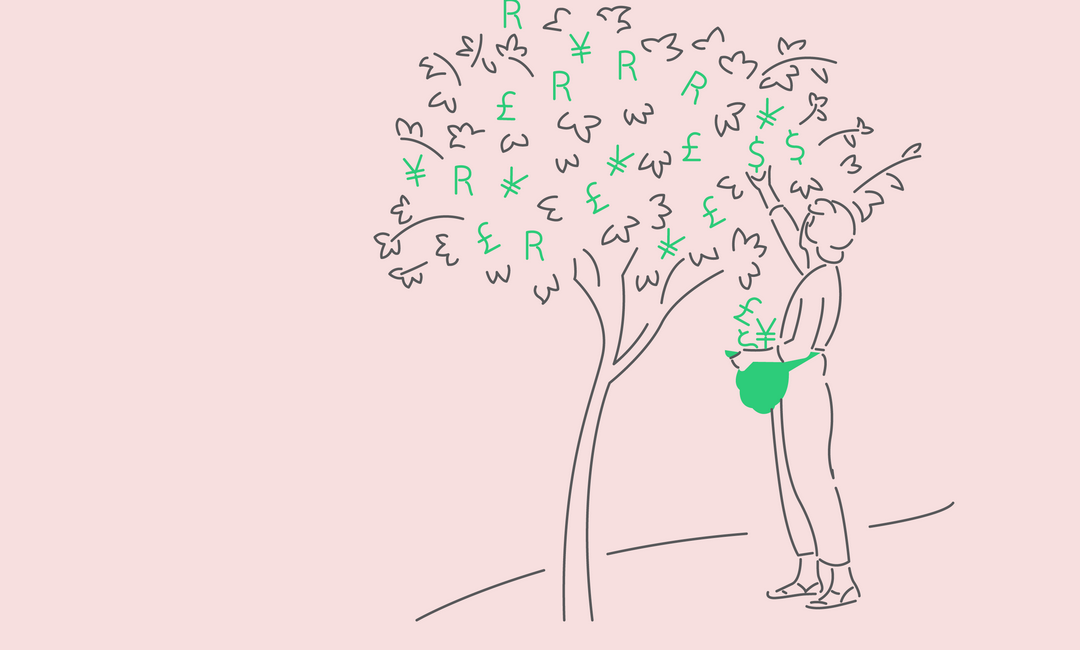 There is an increasingly wide disconnect between the economic reality on the ground and the valuations reflected in some asset classes globally, begging the question – do fundamentals still matter? Rory Kutisker-Jacobson discusses the disparities, risks and opportunities that have emerged over the last few months and provides some perspective on valuations.

The immediate impact of the COVID-19 pandemic and government responses has been significant. Looking at the US as an example, GDP was down just under 9.5% in the second quarter – the single-worst contraction in the history of the US; even worse than during the Great Depression. US unemployment has swung from generational lows to generational highs with more people out of work than during the global financial crisis. Similarly, South African GDP contracted 16.4% in the second quarter. At the end of 2019, the official unemployment rate in South Africa was 29.1%, and this number is forecast to grow to 35%.

The global economy is in the doldrums, and we don’t yet know how long the virus is going to be with us, if there will be a second wave and future lockdowns, or how soon a vaccine may be proven effective. Yet world markets have shaken off both the current economic reality and these fears. From the bottom in late March, both the MSCI World Index and S&P 500 achieved record highs towards the end of August. There is blood on main street, but the champagne is flowing on Wall Street.

What exactly is driving this increasingly wide disconnect between economic reality and the valuations reflected in global equities?

We believe quantitative easing is one of the main driving factors. Quantitative easing, or money printing, is happening at an unprecedented rate in the world. Money supply is astronomical. Between March and July this year, the US Federal Reserve expanded its balance sheet from US$3 trillion to US$7 trillion.

The printing of money has suppressed interest rates globally, particularly in developed economies, with rates now at generational lows. The US 10-year T-Bill offers a paltry 0.6% return, while in some countries, such as Switzerland, government debt yields have gone negative, with investors taking on return-free risk in government securities. The suppression of interest rates has inflated all asset classes and pushed yield-seeking investors into equities, pushing up prices further.

Although overall indices are achieving record highs, these returns are increasingly concentrated in only a handful of names. Since December 2014, the MSCI World Index is up a cumulative 40%. Strip out the US, however, and prices are up a meagre 8%. In other words, global equity investors not invested in the US would have achieved disappointing returns on average.

…There is blood on main street, but the champagne is flowing on Wall Street….

Concentration in the US market

As shown in Graph 1, if we unpack the US market, we see a similar concentration in returns. Over this same period, the S&P Index is up a cumulative 65%, but if we strip out the largest contributors, a very different picture emerges. Just six stocks, Facebook, Amazon, Netflix, Google (Alphabet), Apple, and Microsoft (the so-called FANGAM stocks) account for most of the S&P’s returns. Excluding these, the S&P is only up 29% since December 2014. In contrast, the weighted average return of the FANGAM stocks is a stellar 333%. US tech stocks have been just about the only game in town. This has created huge concentration in the S&P, with the five largest companies (FAGAM) now accounting for more than 20% of the index overall. This level of concentration is higher than that seen at the peak of the dotcom bubble. 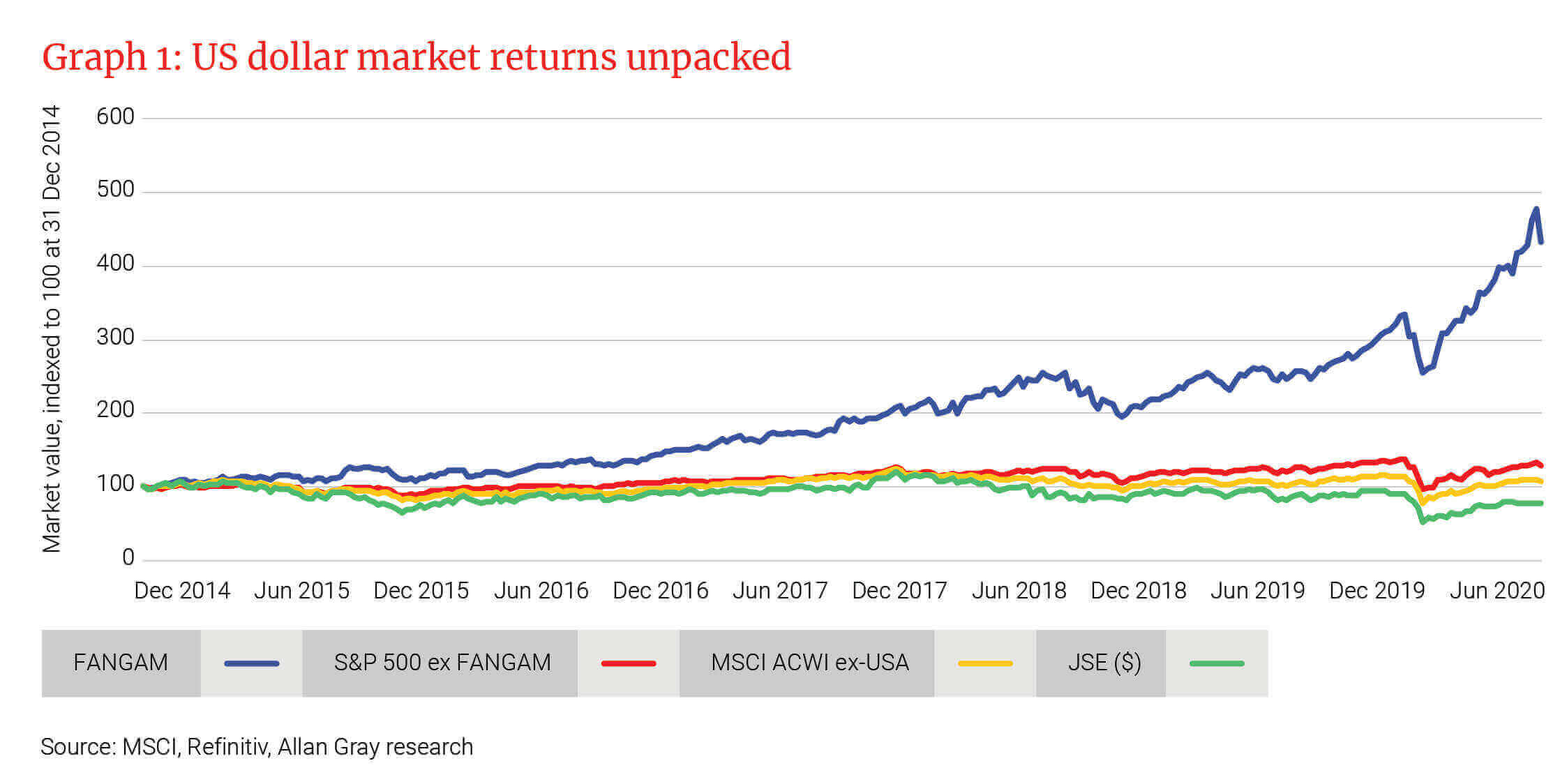 Make no mistake, these are high quality businesses, but when you look more closely at the numbers, there is a huge amount of positive sentiment priced into their current market prices. For companies that are already massive by global standards, it may become increasingly hard to achieve the growth prospects implied by their current multiples.

If you look at Facebook and Google, for example, most of their revenue comes from advertising, with their combined advertising revenue now exceeding US$200 billion per year. The global advertising market, which includes TV, press, print and digital, is estimated to be a little over US$600 billion, which means that Facebook and Google already account for a third of the world’s advertising spend. Their current multiples suggest they will continue to grow at a significant rate, but if they continue to grow at 15% per year over the next decade, and the global pool of advertising grows at its historic rate of around 3%, by the end of the next decade, just those two companies will earn 100% of every dollar spent on advertising globally. Possible, but improbable. Of course, the global pool of advertising spend may grow faster, or Facebook and Google may expand their businesses into multiple other revenue streams. If this happens, then their current valuations will prove justified. But what if it doesn’t? What if their growth slows faster than the market anticipates, or heaven forbid, their businesses contract? What does that mean for their valuations? The contraction in their share prices could be material. There is very little margin of safety.

Bringing the conversation back home

South Africa has been an even worse place to invest than the MSCI World Index excluding the US. The FTSE/JSE All Share Index is down 23% in US dollars since December 2014 and, like the US, there is huge concentration. If you didn’t own four of our largest stocks, Naspers, Anglo, BHP and Richemont, your returns would have been materially worse.

Does this mean we should be buying SA stocks hand over fist? Not necessarily. While we are finding fantastic value in some select SA-focused companies, and have been increasing our exposure, we think some caution is warranted and it still makes sense to have a material portion of your investment portfolio offshore. South Africa came into the pandemic in a precarious position after a decade of growing deficits and slow growth; COVID-19 has exacerbated this. Debt to GDP is growing, many state-owned enterprises are failing; and we had one of the harshest lockdowns globally, severely impacting our economy. We are yet to see the willingness in government to make the tough decisions needed to take our economy forward. In addition, while select US tech stocks have performed fantastically, there are plenty of other opportunities that are equally attractive offshore. Therefore, we think it makes sense to make use of the maximum offshore exposure in funds governed by Regulation 28. In the Allan Gray Balanced Fund, we currently have 29.1% exposure to offshore assets and 44% exposure to local equities