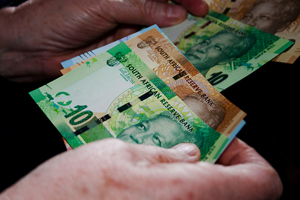 The Minister proposed that the personal income tax rates increase by one percentage point from the second bracket upwards. This will result in increased tax for tax payers earning more than     R181 900 a year. However, tax brackets, rebates and medical scheme contribution credits will be adjusted for inflation, as in previous years. The net effect is that there will be tax relief for income levels below about R450 000 a year, while those with higher incomes will pay more in tax. The rate of tax for trusts (other than special trusts) has also increased from 40% to 41%.

Click HERE for a budget summary which shows the adjusted tax rates applicable to individual taxpayers and special trusts for the 2015/2016 tax year. Also tabulated below.

The example below demonstrates of the changes on individuals younger than 65:

As a result of the increase to the marginal tax rates, the highest effective capital gains tax rates increase as follows:

Due to no change in the companies’ tax rate, the maximum effective rate for companies remains unchanged at 18.65%.

The interest exemption threshold has not been changed as a result of the tax-free investment vehicles that will be introduced on 1st March 2015 (see our next newsletter).

It is expected that these amounts will remain unchanged in the future.

Following recommendations of the Davis Committee, further relief was proposed for small businesses. These are businesses where one of the requirements is that the business has a gross income of less than R20 million in a financial year.

The tax rates for small businesses for financial years ending on any date between 1 April 2015 and 31 March 2016:

With effect from 1 March 2015, the initial tax credit (for contributions to medical schemes) for all tax payers is R270, and for a taxpayer and his or her first dependent is R540. An additional credit of R181 is afforded to each additional dependent.

For taxpayers younger than the age of 65 an additional tax credit will be given of an amount equal to 25% of the aggregate of:

For taxpayers 65 years of age or older, or who are disabled or who have any disabled dependents, an additional tax credit will be given of an amount equal to the aggregate of:

It is proposed that the additional tax credit afforded to employees who are 65 years and older with respect to their contributions to medical schemes may also be accounted for in the monthly PAYE calculations. It is likewise proposed that this facility will also be afforded to over 65 year old provisional tax payers.

Currently only members of retirement annuities and preservation funds may, subject to fund rules, elect to retire from the fund at any time once they reach the age of 55, whereas members of pension and provident funds must access their retirement benefits upon reaching “normal retirement age” defined in the fund’s rules.

With effect from 1 March 2015, members of pension and provident funds will be able to elect, at any time after reaching normal retirement age, when they want to access their retirement benefits and trigger the accrual thereof for tax purposes (fund rules must be amended to allow for this).

The most important change introduced by the 2014 Taxation Laws Amendment Act was the delay in the implementation of the retirement reforms by a year. This delay has the result that the following changes will only be implemented on 1 March 2016:

The exchange control manual is being simplified and will be completed in 2015. The following threshold changes will take effect from 1 April 2015:

National Treasury is concerned that some individuals are transferring assets into retirement annuity funds for the purposes of avoiding estate duty, rather than for retirement provision purposes.

To eliminate the potential to avoid estate duty, Government proposes that an amount equal to the non-deductible contributions to retirement funds be included in the dutiable estate when a retirement fund member passes away.